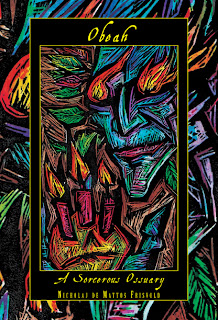 Of all the African-derived cults and sorceries, Obeah is one of the least-known and least-understood. Often confused as a chaos magic of the Caribbean, or confused with the religion of Vodou, it is a shadowy practice that while is not entirely understood is respected for its great power. After shedding light on the similarly misunderstood cults of Palo and Quimbanda, Nicholaj de Mattos Frisvold has brought his balance of impeccable scholarship and astute spiritual insight to illuminate Obeah. This thought-provoking and powerful monograph aptly titled, Obeah: A Sorcerous Ossuary, reveals an inside perspective into this powerful spiritual art.

Like all his other books, Nicholaj de Mattos Frisvold speaks from the perspective of anthropological scholarship as well as that of a practitioner. This unique blend of scholarly standard combined with an inside perspective makes his writings unique as they become accessible and useful to both practitioners and academics alike. Through his writings, he has tackled the difficult task of shining a light on practices that are either unheard of or barely understood in the English-speaking world. Obeah: A Sorcerous Ossuary, is no exception. While acknowledging that the shadowy and highly pragmatic nature of Obeah combined with its variation from island to island makes defining Obeah difficult, the book manages to illuminate by tracing the root practice, detailing the major spirits and deities, and highlighting several practices of Obeah. In this way, glimpses of this practice are shown.

One of the things that I admire about Nicholaj de Mattos Frisvold is his respect of tradition. He is not an author who enters into a cult and acts in a appropriative or disrespectful manner. He honors his lineage and teachers by writing down the cult as he has learned it while recording practices as they practiced today. In Obeah: A Sorcerous Ossuary he emphasizes that this practice is initiatory and tied directly to a hereditary lineage. Yet, because of the unique nature of this sorcerous way, there is something familiar to the reader, especially those who practice Hoodoo, Palo, or Quimbanda. To the root doctor, the imminently pragmatic nature of Obeah along with the drawing of power from the green world is something that is all too familiar. And the dynamic fire at the center of Obeah along with its ability to work with powerful spirits of nature and night strike a chord with a Palero and Quimbandiero alike. As a conjure doctor and Tata Quimbanda, there was much that resonated with me.

After discussing the historical roots, cosmology, and major spirits and deities of Obeah, the book focuses in on what Obeah actually is--a spiritual potency and power that is used to fuel healing and malefica through the powers and world of Sasabonsam, Papa Bones, and Anima Sola. In these parts, the prophet and poet in Nicholaj de Mattos Frisvold steps forth as he manages to capture something that is nearly beyond words and it becomes evident to the reader that not only is he an author, but he writes under direct guidance and inspiration from the spirits themselves. In this way, his writing goes from being books about magic to books of magic. You can almost feel the fire emanating from the words on the pages and the crackle of power with each turn of the page.

The book concludes with several practices that reveal the unique and pragmatic nature of Obeah that combines the fiery power passed down to the Obeahman with the ability to call upon spiritual agencies to carry out works of sorcerous might. The manifestation is a special blend of magic that draws upon African, Christian, and Grimoiric sorceries. The Kabalistic Banquette of the Lemegeton demonstrates this amazingly well as the spirits of the grimoires are drawn down in a European-style banquet combined with African perspective on possession. Truly a marvelous illustration of Obeah's practices. Of particular interest to me was the oracular dice used in Obeah, which I found fascinating.

Not only is Obeah: A Sorcerous Ossuary the first book of its kind, but it does what few other authors can, combine an astute scholarly approach with that of an actual practitioner. This approach cannot be praised enough for too long books on magic and the occult were one-sided in their approach and left much to be desired. The result of this blend is that this book becomes deeply illuminating, but also has the effect of stirring the readers own embers as the potency of Obeah comes alive through the masterful hand of Nicholaj de Mattos Frisvold.

Whether you are a practitioner of the African-derived arts or simply curious, this book has something for you. Do yourself a service and purchase it from Hadean Press now. Approach this tradition with respect and honor the heeding within the book and you'll find something powerful opening up by reading.