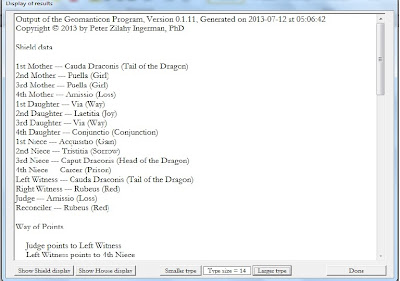 I've been meaning to post a little bit about geomancy, but have been pretty busy. However recent events give a good means of demonstrating how this ancient form of divination works and the great results one can achieve from it.

Now, I practice geomancy a tad differently than others as I come from a khatt al-raml school of thought which has slightly different emphasis in its approach, but I shall present this post as an example of traditional geomancy.

I cast a chart for the trial of George Zimmerman to see what the outcome would be. I frequently work with mundane astrology, horary astrology, and geomancy to get answers to things going on in the world as I believe that the magus and diviner is not just a person immersed in a separate world of spirits, candles, and rites, but a person attune to the flux of life and nature's cycles. So it is quite common for me to take time out to do readings for political elections, the outcome of trials, the course of conflicts and much more.

I did the same with the George Zimmerman trial, a trial that has captured the attention of the nation which carry within it an investigation of the self-defense laws of Florida, the character of the two individuals, George Zimmerman and Trayvon Martin, as well as a close look at race issues. While I do have my own bias regarding what happened and what should happen, this post will specifically be about an exploration of the situation from a divinatory point of view and will not be a commentary on the events or the outcome of the trial. My heart and prayers do go out to the family of Trayvon Martin for their loss and I pray for their peace.

I am a little late in this post as the trial is over, but such is the life of a busy ConjureMan and while moot at this point, it is a good exercise to see how geomancy works. Above is a screen shot of a dated and time-stamped record of the figures cast for this geomantic chart. While I cast all my geomantic charts by hand either using al raml dice or I generate the Mothers the traditional way, for larger predictions I then record those results using Renaissance Astrology's Geomanticon software which provides me a way of attaching a date and time to the predictions, which is helpful for when I have to go back and check the results against my prediction. 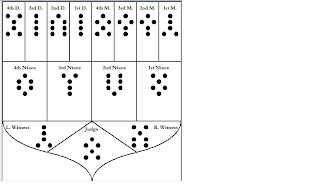 While the first image is useful in showing when the chart was recorded it doesn't show the actual chart and figures which is far more useful. Above we have the figures as they are placed in the shield chart (called takht in khatt al-raml). Again these are the figures that I input into the Geomanticon software after casting the chart by hand. While I shall go more in depth into how geomancy works and some basics in another post, I'll focus more on my interpretation of the chart. In khatt al-raml the shield is the first place we look for the overall answer to a question or situation.

The Right Witness is Rubeus revealing rage, upset, and emotional imbalance. Here we see that this trial brings out the worst in people and that ultimately this trail is born out of bad and hasty decisions on the part of George Zimmerman. Whether he is an evil racist, or not, I leave to other people to comment on, but suffice to say that geomancy reveals that all of this started because Zimmerman was in a place of frustration, of anger, and acted out of corrosive emotions and poor decisions. This also speaks to the environment around the trail itself and we see here the clear indication that this trial was brought before the court out of a sense that preliminary actions were an upset to what should have happened.

The Left Witness, which represents the future, is Cauda Draconis. While normally a relatively negative figure indicating the end of things, in matters of dealing with jail and going to prison it is usually positive indicating either a favorable end, or being released from jail. Here we see that the end of the trial favors Zimmerman and that the future shows a positive end for him. He will walk away from this having a good end to the trial.

The Judge is Amissio a figure of loss which can be negative in financial matters, but quite positive in matters of the heart and where one wants an end to things (jail time, illness etc). In khatt al-raml the Judge is the ultimate answer where in more European and modern day geomancy the astrological houses and modes of perfection take precedence. For me, the Judge gives me the answer and the house fleshes out the details. Our Judge ultimately tells us that things are looking good for Zimmerman and he may get off without jail time. However, Amissio also means loss in a larger scale and so while in legal court Zimmerman may avoid jail time and be acquitted, it is likely that the court of public opinion will be against him and he may in the long run lose even if he avoids jail and is found not guilty.

We next look to the 1st and 4th Mother to see how things started and will end. Cauda Draconis as the First Mother shows us that many people have already made up their mind about the case and George Zimmerman himself had already made up his mind about Trayvon Martin before the confrontation happened. This case is the result of pre-judging a person and situation and Cauda Draconis speaks to that. Amissio as the 4th Mother confirms the high chances of being found not guilty and passes to the Judge. 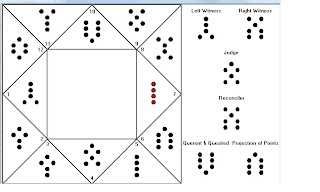 I then examined the house chart which is based off of astrological considerations and there are some who even refer to this method as astrological geomancy. Now in the first house we have Cauda Draconis which to some geomancers indicate that you should stop the reading and set it aside for a time before casting a new chart--often because one has already decided on the answer before casting the chart. In khatt al-raml we are a bit more practical and continue a reading while noting such signs (the same for Rubeus in the first house which some people deal with by tearing and burning the chart, but not in khatt al-raml). But because this is a third party question, we rotate the chart to the seventh house, the house of the other which represents Zimmerman therefore the 1st house in the rotated chart is the 7th. Here we have Via revealing that that he feels particularly confident about the way forward and that while matters may be out of his hands and he must acquiesce to a passive role letting the legal system work things out, that he is confident about his release and Via is about the open road. Via passes into the 11th house in the rotated chart revealing that his release is going to hinge strongly upon his allies and friends who will step up to help him and that his legal defense relies heavily on calling upon those allies and friends. Together they will work for his release and will provide great support. Zimmerman is not afraid to ask for help from his friends who are also willing to help him.

Also because Via is in the 11th house, he may expect help from unexpected sources and witnesses.

Prison and other such unpleasant matters are found in the 12th house which in the rotated chart contains Laetitia, or joy (6th house before rotation). This is an omen of victory for Zimmerman further confirmed by the fact that Laetitia is a mobile figure and is favorable for avoiding jail time or being released from jail. Furthermore perfection through conjunction happens with Via springing to the 11th house of the rotated chart. This further favors success and victory for George Zimmerman and again emphasizes that his friends will play a great role in helping him get released.

To ferret out hidden factors we look to the Projection of Points which is is found in the 6th house of the rotated chart which contains Carcer, prison or the lock. This tells us that this trial will have a heavy impact on Zimmerman's health and he may find himself feel trapped as a result of the emotional and physical strain it takes on him. He should be particularly aware of knee and leg problems. It also tells us that he will likely continue to work with his same legal team in further upcoming legal matters. Now, while traditionally the 10th house refers to career, some also take the 5th to include jobs which in this case would mean he'd have a hard time getting hired going forward.

The figures themselves along with all the positive factors reveal that things are going to go Zimmerman's way. My prediction then was that Zimmerman would not go to jail and will likely be acquitted, but may face heavier losses down the road--Amissio as Judge.
Posted by ConjureMan Ali at 1:56 PM

Nice. I do sand divination too. We refer to it as Al-tulab. My teacher lives in Burkina Faso. Very nice to see someone other than myself use this. We even use the figures to influence outcomes inferred by the house arrangements. These are called sudika

Interesting, I am familiar with some of the practices of Burkina Faso, but in the wider West African region. My own teachers are actually more North and East African, but I have learned quite a bit about West Africa's divinatory schools.

Al Tulab means "the students" and is plural of "talib" so it is interesting to call the system that. I am more familiar with its Ar Darb name.

Also the idea of arranging the figures to influence fate is quite common in Morocco and Tunisia.

The amazing thing is how the figures begin to actually "communicate" to via dreams and even the physical representations. I'm very fortunate for my teacher Harouna Nadiaba Lalbilla of Tangkodogou Burkina Faso