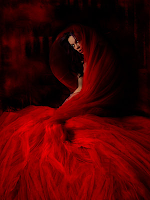 Pomba Gira, the Mistress of Witchcraft, is a spirit veiled in mystery and magic. She forms one part of the principle spirits called upon in Quimbanda though she also makes an appearance in the other Afro-Brazilian cults. Her nature, like that of her counterpart is often a mystery revealed only to those who are her devotees and initiates.

To the outsider she is known as the Lover and Mistress of the Devil; a woman of the night who embodies sensuality and witchcraft.  But to her initiates she is the wise sorceress born from a legacy of African necromancy and European witchcraft.

It is theorized that the etymology of “Pomba Gira” can be traced back to the Kongo spirit of the crossroads, Bombojila who known by some as Aluvaia. How the rather masculine figure of Aluvaia became Pomba Gira, a decidedly female spirit, rests in the nature of Aluvaia as containing both sexes. Some depictions of this spirit often showed both male and female combined into one figure.

Along with this connection to the Kongo spirit of the crossroads, the figure of Pomba Gira is also linked to the concept of the African witch. Any syncretism between the iyami and Pomba Gira would be misleading, but certainly the idea behind the African witches can be seen as the spiritual ancestor to Pomba Gira. She is the force of woman that is lethal in its power and mighty in sorcery, a nearly inhuman force of the night. From this springs the image of Pomba  Gira as a serpent descending from a tree in the middle of the crossroads.

Her European heritage can be found in the figure of the red witches of Spain and Portugal. Women who worked malefic magic for love and destruction and who find their epitome in Maria Padilha, the legendary sorceress and mistress of royalty whose name is immortalized in incantations that call upon her alongside devils and demons. The red witches, like Maria Padilha were famed for their mastery of gypsy potions and poisons, and for their mastery of the magic of the Moors and the necromancy of the ngangas.

And it is through this melding of the red witch schooled in the magics of Africa with the inhuman night witch of the West African people birthed in the fires of the crossroads ruled by Bombojila that Brazilian Pomba Gira is born.

While both Exu and Pomba Gira are deeply connected to their African roots, Pomba Gira in her various incarnations is a true spirit of Brazil. Like the nation that birthed her, she is rooted in Africa, accepts a European influence, and yet retains her own unique identity.

Pomba Gira is legion, and like her counterpart, she is the collective of the sorcerous spirits of witches and priestess of Quimbanda, nurtured in fire and found in her respective queendoms of crossroad, tavern, ocean, forest, and cemetery among other such places of power. Her power rests in the liminal tied to the fires that spark in the night. Sometimes called Exu Woman, she is in reality no one’s woman, but her own. She represents the free woman whose powerful sexuality is both a seductive lure to men and a threat to patriarchal society which seeks to label her. 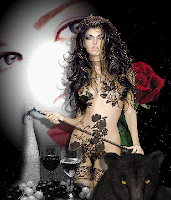 The vulgar see her as a whore to be bought, but the wise recognize her as Woman unfettered by the restraints of society and brimming with sexual potency and sorcery. She is sex for the purpose of sex, love for the purpose of love, and best knows the human heart with all its woes and troubles. To those who come with these woes to her, she offers quick solutions bringing them the love that they desire while offering them solace and comfort.

She is a demanding and voluptous mistress whose path truly is harsh. Born from a mingling of blood, fire, and sulfur, Pomba Gira is a force that sometimes defies definition and challenges you to see beyond the restrictions our socialized mind puts on her. Approaching her can be dangerous to the uninitiated for she is fiercely protective of her cult and will destroy those who try to circumvent it, though after she takes you for a ride.

Where Exu is met at the four-way crossroads, Pomba Gira rules the T-crossroads. When her devotees call she arrives in a flurry of skirts to grant prophecy and work magic. Each Pomba Gira has their own tastes, but generally enjoys roses without thorns, wines, champagne, cigarillos, ribbons, fruit and fine cloths and jewels.  But for those who attempt to use her as a whore, or appropriate her from her cult, she’ll feast on them rather than the offerings. 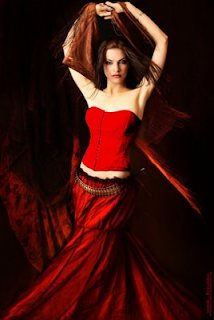 There have been some attempts by North American and European practitioners to appropriate her into Thelemic circles as Babylon, or by others (like the so-called New Orleans Voodoo practitioners) as a Sacred Feminine. These attempts are based off incorrect ideas about her and contrary to her nature. She is neither Babylon nor is she some love goddess. She is a legion of spirits who in addition to love and sex is associated with death and destruction. Such appropriations are not only incorrect, but potentially lethal for they assume that she can be approached by anyone. She cannot. She is a demanding spirit who will burn those who dare to try to use her.

To those she takes as her devotees she is the oracular serpent of the crossroads whose words of truth bring wisdom and whose magic can weave the threads of destiny in their favor. 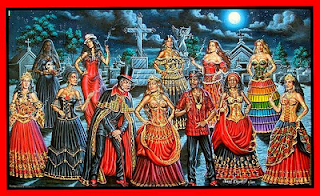 Posted by ConjureMan Ali at 7:43 PM

I find Pomba Gira to be a fascinating spirit, but with so many cautions about her I am never certain whether my fascination is due to heeding her call or whether it's just fascination with something I don't entirely understand. I have read the book on Pomba Gira and the chances of me ever finding a group to learn from in England is non-existent so I suppose I will just admire Pomba Gira from afar. I appreciate your explanation of Pomba Gira and thank you for sharing it.

Oya those meant to join her cult will eventually find a way, afterall these are crossroads spirits.

Jason, I completely know what you mean. Kimbanda is the only ATR I initiated in for a reason, even though the door to others are wide open to me, just don't feel the pull.

Also Kimbanda is the least dogmatic of the ATRs in my opinion.

So why are so many of the spirits smoking? I see this alot in ATR images.

Tobacco is one of the offerings many spirits of different ATRs receive.

Pomba Gira and Exu both accept Tobacco and have different preferences in the type of Tobacco.

Ahhh okays, so is that why lucky mojo sells tobacco incense?

Beautiful piece on Pombagira. I am an initiate of both Candomblé and Kimbanda.

I've just begun learning about Pomba Gira. I feel drawn to her for some reason.

I was wondering if she has a Haitian counterpart at all. Does anybody know? Thank you!

Pomba Gira is her own entity and if you are looking for a syncretism with the Lwa that would be the wrong way to go about it.

However if you are simply looking for a parallel for intellectual reasons then Erzuli Dantor has some similarities to Pomba Gira.

That said, it is always best to treat spirits as unique. Not saying that that this is what you're doing, but last thing we need is altars set up to Erzuli Dantor with Pomba Gira on it and with people saying they are one and the same ;-)

"Sometimes called Exu Woman, she is in reality no one’s woman, but her own. She represents the free woman whose powerful sexuality is both a seductive lure to men and a threat to patriarchal society which seeks to label her."

Well now I know why she called to me. I've said this all my life, that I belong to no one but myself. It's why, even in the best of circumstances, I get this uncomfortable feeling in association with "she's my ____ (friend, best friend, coworker" and "you're mine." No. You can swear yourself to me, but I am mine alone.

"Pomba Gira rules the T-crossroads."
Now that is interesting.

Thank you for the information, she strikes me as the embodiment of "female" and something society as a whole has lost.

Excellent article on Pomba Gira, ConjureMan Ali! Thanks for clarifying many of the misconceptions around her. I hope that more people will see that she is not a spirit to be toyed with nor is she willing to be "adopted" by those who are uninitiated. Great post!

Thanks, Dr. E. I hope it counters some of the misinformation out there.

I enjoyed reading this article.. I've just found out about pombagira and i feel drawn to her.. I am anxious to learn more about her

Glad you enjoyed it. You can check out www.houseofquimbanda.org for more information.

Well this is a bit complicated because the idea of being a "solitary" practitioner is entirely new. These cults are ultimately communal and you work together with a spiritual family.

That said, the dynamic is changing. For those interested in working with these spirits you need to seek out an authentic Tata or Yaya of Quimbanda who will read for you and see which of these spirits walk with you. If you get the green light from them then there are levels of involvement. The first which is without initiation is setting up a spiritual space for them just for the purposes of getting to know them and they you. The second level is a rite of licensing that allows you to actively work with them safely, and then finally initiation for those who want to become the priests and priestesses of these spirits.

So no you don't have to get initiated, but you still need proper guidance and without initiation there is only so far you can go with them, limiting yourself to just inviting them in your life and not much active work.

But again it is all about getting guidance. You don't go at this alone.